June 01, 2019
One of the most important things writers in any genre can do is read! Today, Kate Garrett shares her thoughts on one of her recent reads. 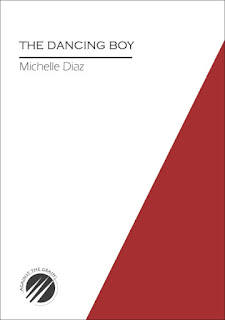 In only twenty-four poems, The Dancing Boy achieves great things. It manages to comment on everything from childhood trauma and difficult familial relationships, to growing into oneself, motherhood, and even death – every stage of life is here, and though the language is so utterly unusual, framing so many aspects of being human for the beautiful and sometimes tragic absurdities they are, they are somehow bits of life you, and I, and others will recognise.
Before I go any further, I do need to disclose something. The first poem in the book, ‘Do not go to Kilburn’ was published at my web journal Picaroon Poetry, and I nominated it for Best of the Net in 2018. This being said: I knew if the other poems were anything like that one, it would be a very special book. And of course, it is.

‘Did you ever sleep-walk, just above your life?
pad so softly, like a light-footed observer. Realise
you didn’t really want it,
it was too tight, didn’t fit or feel right?’

says the first stanza of ‘Disassociation’, and it is the impression left on me by the whole of the pamphlet. Very early on the poems move through wondering a what-if life without children for a problematic mother, placing the speaker of the poem elsewhere – “I’ll stay on my cloud.” – in ‘Do not go to Kilburn’, to another sort of what-if scenario for another grown child with an alcohol addiction, pleading with the parent to see their part in it

“Suppose he were to take his childhood to heart,
place his future in a can of extra-strength lager,
retrieve his wellbeing by drinking years full of the stuff.

Wouldn’t you go back in time, kiss his wet face,
allow him to leave the light on?”

in ‘Taking the Law into a Child’s Hands’. These two poems made me cry on a train, as did several others. Diaz has a talent very few others possess – the ability to blend very human, very believable and accessible ideas with strange imagery and startling phrasing. ‘Deep Sea Diving’ presents cysts and polyps as pearls and seahorses; ‘A Birth Journey in Nine Movements’ talks of characters who “float round the room like balloons in denial”. And instead of separating us from these truths, they do what good metaphor and simile should do – they touch something within the reader and pull us in closer.

‘The Dancing Boy’ himself is the poet’s son, and it wouldn’t be a full review without mentioning her poems about him. They are so real, and bursting with

that the love itself leaps of the page. It is in these poems, and in the last – ‘Trust your life’, which gives the advice to “Kiss the open hand of acceptance” – where the gentle and kind heart of the poet, so apparent even in the poems about difficult mothers and other family members, is able to fully shine through the adversity.

All week this week as featured artist, I’ve shared and/or written about all things magical, fantastical, and The Dancing Boy is no exception. The magic found here is in healing, and in the bumpy landscape of human existence Diaz’s exquisite language lays out for us.

The Dancing Boy by Michelle Diaz is available from Against the Grain Poetry Press.