Author’s Note: These three sonnets Innocuous, You Are The Virgin In Mythology and Bee Still My Heart are a series from Flutter: Southern Gothic Fever Dream. It’s about the last remaining lemon tree foundlings (two little girls adopted by a family who found them swinging in a basket outside their 1883 Pensacola, Florida, home.) The foundlings, are in fact, fictitious fever dreams of a dying teenager succumbing to scarlet fever, the family’s one actual child. But after her passing, we follow these invented character stories through to their fictitious ends.

This series explores the end of Etienne, a boyish bee demon Sylvia Dandridge invented in her fever dreams, much as she invented the lemon tree foundlings. These two sets of characters came into conflict after Sylvia’s death and the death of one of the twins Fiona which is blamed, egregiously, on Etienne. Fey decides that Etienne, who was wooing her sister and has terrible powers that come with a kiss, must be responsible and must die. But though she concocts a plan to enact this vengeance, will she live through it unscathed, unchanged? 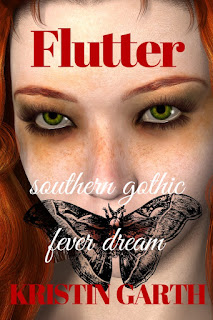 You will not hear the earth against his feet.
Feel dozens of wings. Swarm retreats. Afraid
to meet fertile lips which bloom bittersweet
the irreverent, be they insect, maid
or beast. Bug eyed he spies you, fragrant feast,
a lemon garnish, nectar rub, a face
remembered falling from above, trunk of tree,
lean to seem innocuous, safe to taste,
deemed victim in his beastly place. Eyes command
you. Hold you still. You’re grateful for this lack
of will because you know you couldn’t stand
the fright. He cups your chin, a heart attack
in ribcage, tight. Grateful you cannot resist,
you will offer evil his final kiss.


You Are The Virgin In This Mythology

First tremor is against your bottom lip.
You never had a kiss so you forget,
a moment, what this means — that poison drips
in this half arthropod/fiend. A soubrette
beside a seizing silhouette whose death,
once recognized, you already regret
before it is even done. Virgin breaths
you hold fast until his become bereft.
You remain with what is left besotted with
his rot - an animal, you thought or ghost
but not a boy — kiss you would enjoy. Myths
of sacrificial virgins Greeks composed
two thousand years before you shed your clothes
to kill their demons warn you will decompose.

Deflating thorax you did not see, laid
beneath this lemon tree, is plain to you
as he is still while his enchantments fade
then you will see the insect in the dew,
what he always was to you. Female hearts
he stung inside these woods with boyish form
adopted so he could conform. Departs
from hell, hundreds of years ago, swarms
just like him he would not follow. He found
a forest where he would be king, shape-shift
until, with ease, he was blossoming hounds
and harlots before he received a gift —
maidens, generations of innocence,
a colonizer’s consequence.